“Software is like sex: it's better when it's free.”
Linus Torvalds Finnish Computer engineer and Programmer, creator of Linux. b.1969)

A few times a month I visit Border's Books for the obvious reasons.- a huge chia latte .  While waiting I browse thru the cookbook section, which in my Borders is right behind the Seattle's Best. ( they are evil)  I have a wall of cookbooks( like every blogger) . There are several out there that are great  worth buying the whole book. While others  there may be a recipe or two..I love reading them, studying the recipe, and pictures. I try to dream up my own creations and inspirations.
I do not like to spend a lot of money on cookbooks, because of the wealth of Internet information. Especially recipes- there are beyond thousands out there. I am a second hand, ( GOODWILL) , and EBAY shopper. Spending three dollars on a book for one recipe trumps thirty. ( you get the idea ... we all have the ACCRO don't we??)
I stumbled across this cake on one of my browsing days. I did not right down the recipe. Just the name...and hit GOOGLE. To my surprise very little info popped.  I found one really good recipe from the blog desserts for breakfast.. Stephanie's cakes also look much more appealing than mine..more on that later:( SO Please visit her blog. She has many beautiful goodies to share.) 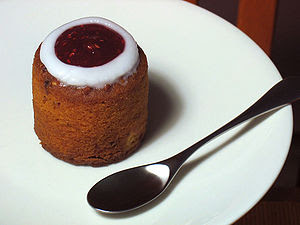 wiki pic
Runeberg's torte (Finnish: Runebergintorttu; Swedish: Runebergstårta) is a Finnish almonds and rum and it usually weighs about 100 grams. There is usually raspberry jam in a sugar ring on the tart. pastry flavored with
The torte got its name from the Finnish poet Johan Ludvig Runeberg (1804–1877) who, according to legend, enjoyed the torte with punsch for every breakfast. Runeberg's tortes are typically eaten only in Finland and are generally available from the beginning of January to Runeberg's birthday on February 5.
I do not know much about Finnish culture and food. They are not world culinarians (just like Canada) . BUT BUT BUT..they do offer an export that blows my mind.  Apocalyptica WHO you say?? Let me introduce you to my Finnish ( LUST) ACCRO. 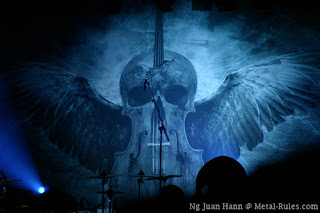 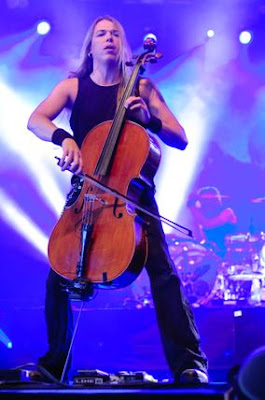 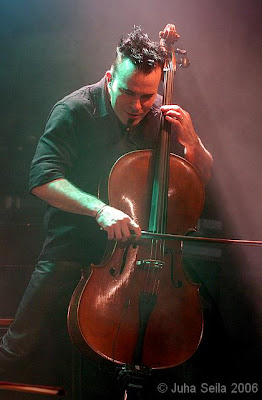 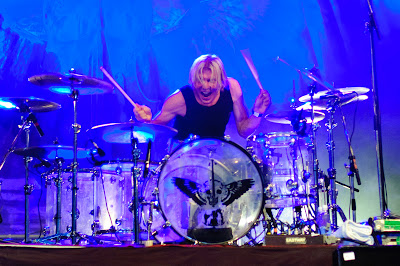 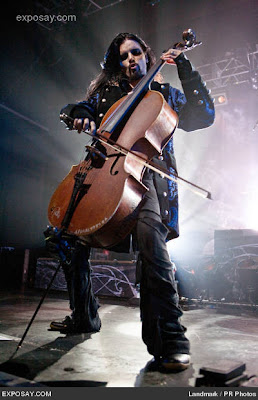 
See for yourself :) The highlighted video is better, but would not post .
http://www.youtube.com/watch?v=zf2aIVKp1OY
or

The originators of "Whip your Hair"


Runeberg Cakes (Runebergintorttuja) from the blog desserts for breakfast.
makes 8 3x3 round cakes

1. Preheat oven to 350 degrees F.  Oil and flour the 3x3 cake rings and set on a silpat or parchment-lined baking sheet. Set aside.
2. In a large bowl, combine flour, ground ginger snaps, ground almonds, baking powder, baking soda, salt, orange zest, and cardamom. Whisk to mix. Set aside.
3. In a measuring cup, stir and combine milk, orange juice, and almond extract. Set aside.
4. Place butter, sugar, and brown sugar in a mixing bowl.  Cream on medium low for about 4-5 minutes.
5. Add molasses to the butter mixture and cream until fully incorporated.  Make sure to scrap down the sides if necessary.
6. Add eggs one at a time to the butter mixture, mixing thoroughly to incorporate each egg between each addition.
7. Gradually add the dry ingredients (flour mix) and wet ingredients (milk mix) to the butter in three stages--dry followed by wet followed by dry followed by wet, etc.  Mix until thoroughly combined.
8. Spoon batter into cake molds until about 3/4 of the way full, being careful not to touch the exposed sides with batter.  Tap the baking sheet lightly on the counter to get rid of any large air pockets.  Use a small spatula or a spoon to smooth the tops of the batter.
9. Bake for 25-35 minutes (shorter if you have smaller ring molds) until a toothpick removed from the center of the cake comes out clean.  Remove from oven and let cool for 10-15 minutes before removing from molds. Then glaze with...

1. While the cakes are baking, make the syrup.  Place sugar and water in a heat-proof measuring glass.
2. Heat the sugar and water in the microwave on high for a minute and a half.  Stir until sugar is dissolved.
(or, Heat in a pot on the stovetop until sugar dissolves.)
3. Add alcohol and stir into the syrup.
4. When the cakes are unmolded, poke the tops with a few small holes.  Use a pastry brush to brush the syrup on the tops and sides of the cakes.**Next time I make these, I will pour a little of the syrup while the cakes are warm, still in molds.  The cake is soo moist I don't think you need to poke holes. Once cooled and removed from the molds, I will brush the sides with a pastry brush.

1. In a nonreactive saucepan, saute raspberries on medium high until they begin to release their juices.
2. Add the lemon juice, sugar, and sifted cornstarch, to the raspberries, making sure to whisk to combine the cornstarch.
3. Stirring constantly, bring the contents to a boil and simmer until the raspberries have reduced and are slightly thickened, about 5 minutes.
4. Remove from heat and let cool.  Set aside.

1. Combine powdered sugar with milk and almond extract. Mix well until a thick icing forms.
2. Spoon icing into a squeeze bottle or piping bag fitted with round tip.  Use immediately.

Assembly:
1. Use a sharp knife and cut a shallow cone out of the top of each cake, like filling a cupcake, but make a very shallow cut, about a centimeter in from the edge.  Scoop out the cone piece.
2. Using a pastry brush, brush more syrup in the cut-out hole.
3. Fill the hole with raspberry topping, about 2 tablespoons per hole.
4. Use the prepared icing in the piping bag to pipe a generous circle of icing around the raspberry topping. 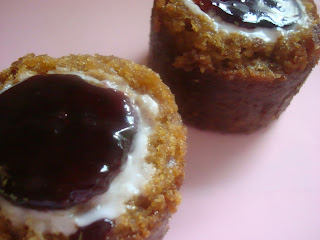 my cake- I let the sugar syrup cook to long. It did not soak thru the cake .  The cake/sryup peeled off when I went to fill it with the jam. So I remade it, and think I added to much.. So the white ring of frosting ran. 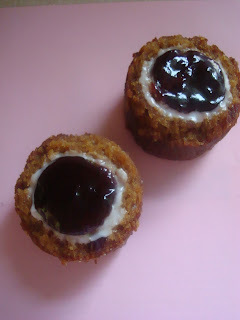 Even though these little gems do not look pretty. They are one of the tastiest little cakes I ever ever eaten. I will make these again, and maybe the next time Apocalyptica plays ATL, I will bring them a plate!

at 8:03 AM
Email ThisBlogThis!Share to TwitterShare to FacebookShare to Pinterest