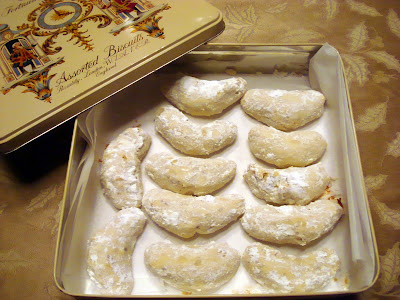 The crescent is one of the oldest symbols known to humanity. Together with the sun, it appeared on as early as 2300 BC, and continues to be used in present day, 2011 AD.

THE CRESCENT AND HAND
Crescents were worn by the ancients to safeguard
them against witchcraft and danger. From this
very early Eastern symbol, horseshoes came to
be regarded by the Greeks and Romans as charms
against sickness and the plague. In the Middle
Ages Horseshoes were used as amulets for witch-
craft, and even today they are looked upon as "lucky."
When the representation of the "Hand of Strength"
was worn with the Crescent, it signified hospitality
and generosity. "Hands of Might" are painted on
houses in Italy, Syria, Turkey, and in the East, to
protect the buildings from misfortune and the
inmates from death. 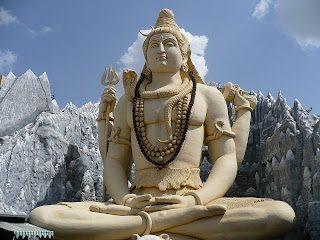 a symbol associated with the Hindu's iconography: with the deity Shiva, who wears it at the top of his matted hair. 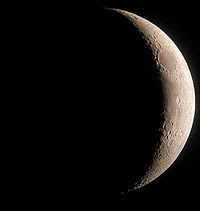 used to represent the moon in astronomy.

The crescent as a neo-pagan symbol of the Triple Goddess. 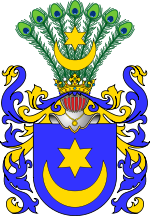 Leliwa. Polish noble coat of arms with crescent as a heraldic symbol. 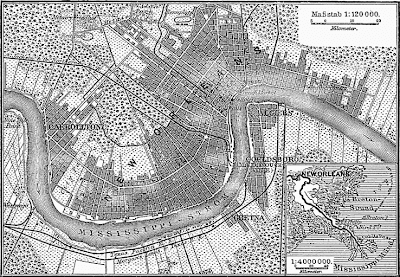 New Orleans is nicknamed The Crescent City, and a crescent, or crescent and star, is used to represent the city officially. The origin is the crescent shape of the old city, hugging the East Bank of the Mississippi River.
Crescent cookies
1 cup butter
1/4 cup confectioner's sugar
2 cups flour
1 1/2 tsp water
2 teaspoons vanilla (I  used Tahitian) You can use any flavor you like
1 cup chopped nuts ( I used Brazil) You can use any nut you like
Preheat oven to 350 degrees F.
Cream sugar and confectioner's sugar.
Add flour, vanilla, water, and nuts.
Mix until well blended.  Dough will be dry .
Shape into crescents on cookie sheet.
Bake@ 10 mins .
Roll in extra confectioners sugar while still warm. Cool. 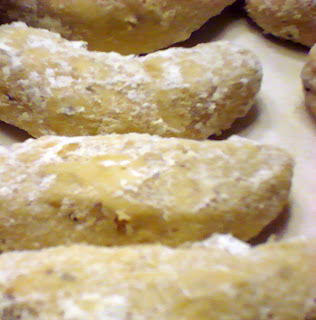 These are one of my favorite cookies. They are so simple and quick. They last forever because they are egg less. They are light and delicate. Melt in your mouth .  You can make them with any nut and flavoring combination of your choosing.
Variations : Madacascar vanilla and walnuts, pecans, almonds and orange blossom water, pistachio and rose water. Nutmeg. Macadamia and lime zest. Coconut water. Like I always say.." a cookie that keeps on giving"
This time I made them more exotic with the fatty Brazil nuts and  -tahitian-vanilla-beans.
If you have not experimented with Tahitian vanilla --please do!  I do not use it in regular cake recipes. This is a simple cookie that will showcase it's different vanilla flavor, vs Madagascar. I will worn you it is more expensive than Madagascar, but worth a small bottle for something different in your baking pantry. 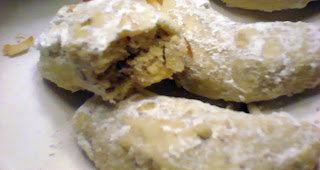 at 10:00 AM
Email ThisBlogThis!Share to TwitterShare to FacebookShare to Pinterest