I love diamonds. Not your  less ordinary small chips you find at Walmart. I am talking BLING of EPIC proportions. Royal family, Lifestyles of the Rich and Famous, and Oprah sized .
Diamonds are a girls best friend, any time of the year . However, with the price of beauty can carry a curse. Here are a few of the most beautiful, rare and notorious diamonds in the world.
10-most-notorious

Our next notorious diamond also has a Napoleonic connection: it was named for Hortense, the daughter of Napoleon’s stepchild, the Empress Josephine. The Hortensia is twenty carats in size, with a pale coral cast. This diamond also disappeared, along with other French Crown Jewels, during the theft that took place in 1792. It was later recovered, along with the others, only to be stolen again in 1830. After the theft, the diamond was rapidly located and returned to its rightful owner. This diamond has a crack along its pavilion, unlike the other diamonds on our list. However, it is so steeped in French history and Napoleonic legend, that it retains its pricelessness despite the flaw. The stone now rests in the Louvre, a glittering symbol of France and of the courage of Napoleon, with whom it will always be linked.

The Star of Africa Diamond

This diamond is the largest on our list, with an almost unbelievable carat size of 530.20 carats. The stone is also know as the Cullinan I, and it was cut from the original Cullinan diamond, which was over 3000 carats in weight. It is rumored that the diamond was studied in detail for almost 12 months before the cutter felt prepared to facet the stone, which was crafted into a teardrop shape with 74 facets. The Star of Africa gains its notoriety from its inclusion in the Royal Scepter of the British Crown Jewels, which rest under heavy guard at the Tower of London.
The Darya-ye Noor Diamond

This diamond has some other romantic names: it is also referred to as the River or Light, or the Ocean of Light. This pale-rose colored diamond has a carat weight of 182, and it is an important addition to the Crown Jewels of Iran. This diamond was discovered in India, and it has remained there, in the ownership of mughal emperors. As it was passed down from generation to generation, it was eventually adopted as an armband decoration by the reigning Nasser-Al Din Shah Qajar. Various members of Indian royalty would adopt the gem to adorn their headpieces or clothing over the years: when not in use, it remained carefully hidden in the Golestan Palace.

This diamond was the first ever discovered in South Africa, one of the world’s most prolific sources of diamonds. The diamond was found by a young boy, while he worked as a shepherd, along the shores of Hopetown’s Orange River. This diamond weighed in at 231 carats before being faceted. The Eureka diamond eventually traveled to England for the inspection of Queen Victoria at Windsor Castle. This famous diamond, like many on our list, was destined to change owners many time, before being purchased by the diamond conglomerate, De Beers, in 1967; it is now on permanent display at the Kimberly Museum in South Africa, where it remains a symbol of one of South Africa’s most lucrative national resources.

The Dresden Green - my favorite!

This extraordinary and rare pear-shaped stone weighs in at 40.7- carats, and is named for the capital of Saxony: its unique, deep-green color sets it apart. The Dresden Green came from India, and it was sold to Frederick Augustus II, son of the ruler of Saxony, Frederick Augustus I. Known as Augustus the Strong, Frederick’s father commissioned the construction of many fine buildings in Dresden, and filled them with all manner of glorious art treasures he collected from around the world. Although Frederick Augustus I admired the diamond for years beforehand, Frederick Augustus II was the first to actually own it. The Dresden continued to be passed through royal ownership and admired for its flawless, emerald-green hue. It currently rests in the Albertinium Museum in Dresden: it was once displayed alongside the Hope Diamond at the Smithsonian Museum, at the request of noted jeweler Harry Winston, who felt that the Dresden was the only other stone in the world that could hold a candle to the Hope Diamond.
A girl can dream ..Can't she?
Now for some edible ones..... 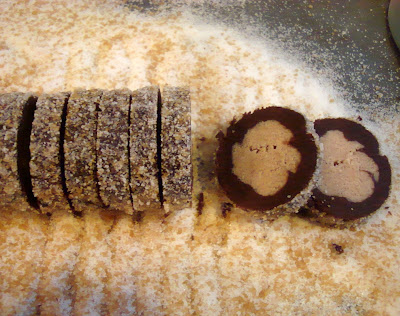 CHOCOLATE DIAMONDS
adapted from Jacques Torres' A Year in Chocolate 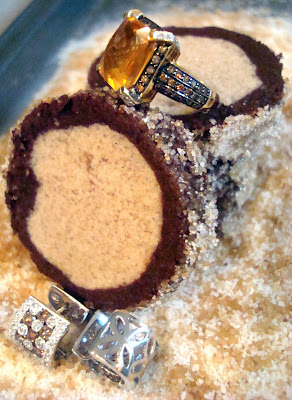 my chocolate diamond earrings and ring 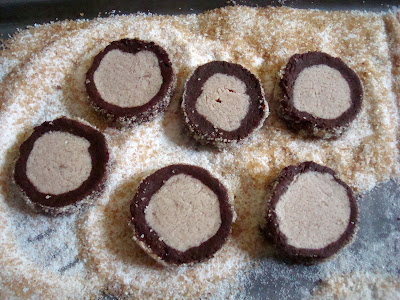 These are light and festive, made with cake flour. A nice alternative from all purpose. These can be mixed and flavored to your pleasure. I have a few in mind :)
TIP: Store your rolled cookies in a paper towel tube. This makes it easier to cut them in equal thickness, and eliminates a flat side that can occur when first stored in the fridge. 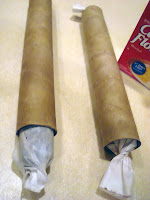 Love on the rocks!

at 12:09 PM
Email ThisBlogThis!Share to TwitterShare to FacebookShare to Pinterest