"Audiences in London called me the girl with the black cherry eyes"
actress ..Maureen O'Hara
Cherry ( Cerise, fr.)  Clafoutis or clafouti (pronounced kla-foo-TEE) is a rustic looking French country dessert from the Limousin region that has become very popular in North America. Traditionally it was made with the first sweet  black cherries of the season, and the cherries were left unpitted so their kernels could release their delicate almond flavor as they baked. A Cherry Clafoutis is a pudding of sorts, with the sweet cherries covered by a thin pancake-like batter and baked in a hot oven until the batter has set with nicely browned and slightly puffed edges. The clafoutis should be served immediately with a dusting of confectioner's (powdered or icing) sugar. 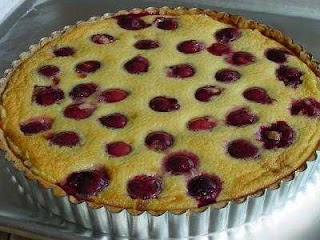 Traditional -without pitting and JAM 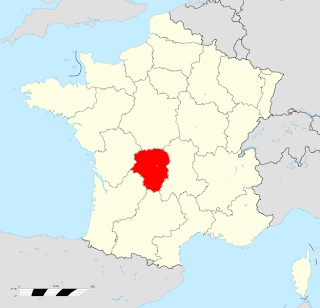 Limousin is a historic province of central France in the northwestern part of the MASSIF CENTRAL. Rich pastures are used for raising Limousin beef cattle, one of the leading breeds of Europe. Other traditionally famous products of the region are AUBUSSON tapestries and enamels and porcelains from LIMOGES, the historic capital and present regional center.
The region's name is derived from the Lemovices, a Gallic tribe native to the area during the pre-Roman and Roman period. The area was controlled by Romans from about 50 BC. In the 16th century it came under Frankish rule. In 918, Limousin became a fief of Aquitaine, and during the Middle Ages it became well known for its troubadour poetry. Beginning in the 12th century, French and English kings vied for the control of Limousin, and during the Hundred Years' War (1337-1453) France gained control of the area. King Henry IV annexed Limousin to the French crown in 1607. In 1790 the province was divided among the present-day departments of Corrèze, Creuse, and Haute-Vienne.

Limoges is the capital city of Haute-Vienne department and an industrial and commercial center in south central France. The city's population is 133,464 (1990). Limoges is located on the Vienne River about 210 km (130 mi) northwest of Bordeaux, on the western edge of the Massif Central. The famous Limoges porcelain has been manufactured there since 1771. Electrical equipment, automobile parts, paper, and shoes are also made in the city. Uranium is mined nearby. The Gothic Cathedral of Saint Etienne, begun in 1273 and completed in 1520, is the most imposing building in the city. Cultural institutions include an excellent ceramic museum (opened 1867) and the University of Limoges (1808).
Limoges was originally the Roman city of Augustoritum. Two towns grew up there, one near the river and one on the hillside, where the Abbey of Saint Martial (9th century), a medieval pilgrimage center, was located. The two towns were united in 1792. Limoges is the birthplace of Pierre Auguste Renoir. 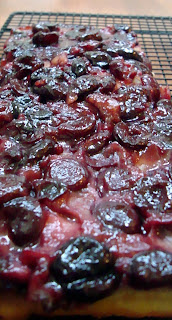 gooey Clafoutis
HAHAHA! nice  Rhyming!
Clafoutis can be made with any fruit you have available . 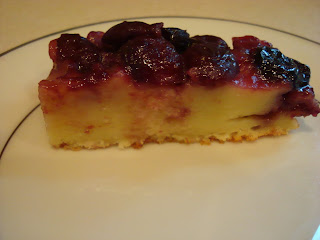 custard center
There are many versions of this recipe on the Internet . I'm sure all good. The custard like texture is very comforting, and I believe many people like to  eat this for breakfast the next day. My Clafoutis is not very pretty with my additions.  My cherries were getting old, and that is why I opted to make this today. I do love the raspberry and black  cherry combination together . I have a jar of nicely pitted Morello cherries, and wonder how they would do? I think I will save them for my next cherry project....coming soon...I hope.
"On est ce qu'on mange"

at 10:01 AM
Email ThisBlogThis!Share to TwitterShare to FacebookShare to Pinterest