""Canada is the essence of not being. Not English, not American, it is the mathematic of not being. And a subtle flavour - we're more like celery as a flavour.""
Mike Myers

The January 2010 Daring Bakers’ challenge was hosted by Lauren of Celiac Teen. Lauren chose Gluten-Free Graham Wafers and Nanaimo Bars as the challenge for the month. The sources she based her recipe on are 101 Cookbooks and www.nanaimo.ca.


Nanaimo Bars (or N.B.s for short) are one of Canada's favorite confections. The beautiful City of Nanaimo, British Columbia lays claim to these squares, telling us on their website that it all began when a Nanaimo housewife entered a recipe for chocolate squares in a magazine contest some 35 years ago. She called her recipe 'Nanaimo Bars' and when she won the contest, not only did her dessert become popular throughout Canada, so did the town they were named after.
Read more: http://www.joyofbaking.com/NanaimoBars.html#ixzz0e8iuKkBi


Nanaimos are a no-bake, three layered bar, They start with a crumb base of crushed almonds, coconut, and graham cracker crumbs mixed in chocolate. Followed by a layer of vanilla buttercream icing, topped with a smooth layer of chocolate.


I know what your thinking......When did Canada start world pastry domination?
( love Vancouver, and Victoria)

Nanaimos are a very rich, almost sickly sweet treat. I love the bottom layer on it's own. The addition frosting layer is too much for me.:( I even halved the middle layer). Maybe a nice bavarian cream?, is more my speed. I also should have tempered the chocolate on the top layer, because once cooled it was a dull mess. 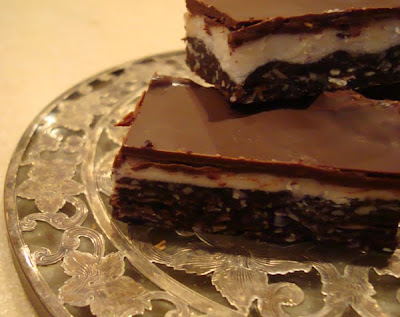 1. For bottom Layer: Melt unsalted butter, sugar and cocoa in top of a double boiler. Add egg and stir to cook and thicken. Remove from heat. Stir in crumbs, nuts and coconut. Press firmly into an ungreased 8 by 8 inch pan.
2. For Middle Layer: Cream butter, cream, custard powder, and icing sugar together well. Beat until light in colour. Spread over bottom layer.
3. For Top Layer: Melt chocolate and unsalted butter over low heat. Cool. Once cool, pour over middle layer and chill.


Nanaimos are a very rich, almost sickly sweet treat. I love the bottom layer on it's own. The addition frosting layer is too much for me.:( I even halved the middle layer). Maybe a nice bavarian cream?, is more my speed. I also should have tempered the chocolate on the top layer, because once cooled it was a dull mess.I substituted vanilla extract for the custard powder.


I did not make a gluten-free graham cracker, and used a Martha Stewart recipe. It was a soft subtle honey flavored cracker. Eaten alone i would have sprinkled some sugar on top for an extra punch, prior to baking. These were very easy to bake and roll.

1. Preheat oven to 350 degrees. Whisk flours, wheat germ, salt, baking soda, and cinnamon in a medium bowl; set aside.
2. Put butter, brown sugar, and honey into the bowl of an electric mixer fitted with the paddle attachment; mix on medium speed until pale and fluffy, 2 to 3 minutes, scraping down sides of bowl as needed. Reduce speed to low. Add the flour mixture, and mix until combined.
3. Turn out dough onto a floured surface, and divide into quarters. Roll out each piece between 2 sheets of floured parchment paper into rectangles a bit larger than 9 by 6 inches, about 1/8 inch thick.
4. Using a fluted pastry wheel, trip the outermost edges or each rectangle, and divide into three 6 by 3-inch rectangles. Pressing lightly, so as not to cut all the way through, score each piece in half lengthwise and crosswise, to form four 3 by 1 1/2-inch crackers. Stack parchment and dough on a baking sheet and chill in freezer until firm, about 20 minutes.
5. Remove two sheets of dough from freezer. Pierce crackers using the tines of a fork. Transfer to large baking sheets lined with parchment paper. Bake, rotating halfway through, until dark golden brown, 8 to 9 minutes. Repeat with remaining dough. Let cool on sheet 5 minutes; transfer crackers to wire racks to cool completely. 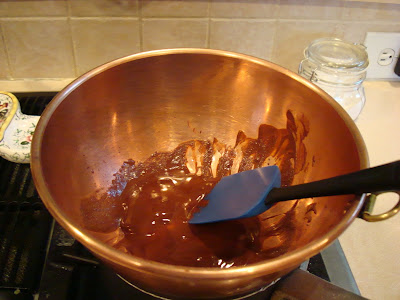 at 5:53 PM
Email ThisBlogThis!Share to TwitterShare to FacebookShare to Pinterest